skip to main | skip to sidebar

As I write I am currently recovering from our trip to Boomtown Fair festival at Matterley Bowl.   This was my first festival with my little one in tow and to say I was nervous about this is an understatement!

Being a seasoned festival goer I know what to expect.  There are festivals that I have attended that I would never consider bringing a baby to, however after attending Gastonbury and Camp Bestival a few years ago (without children) I was fairly confident that I would be able to cope. 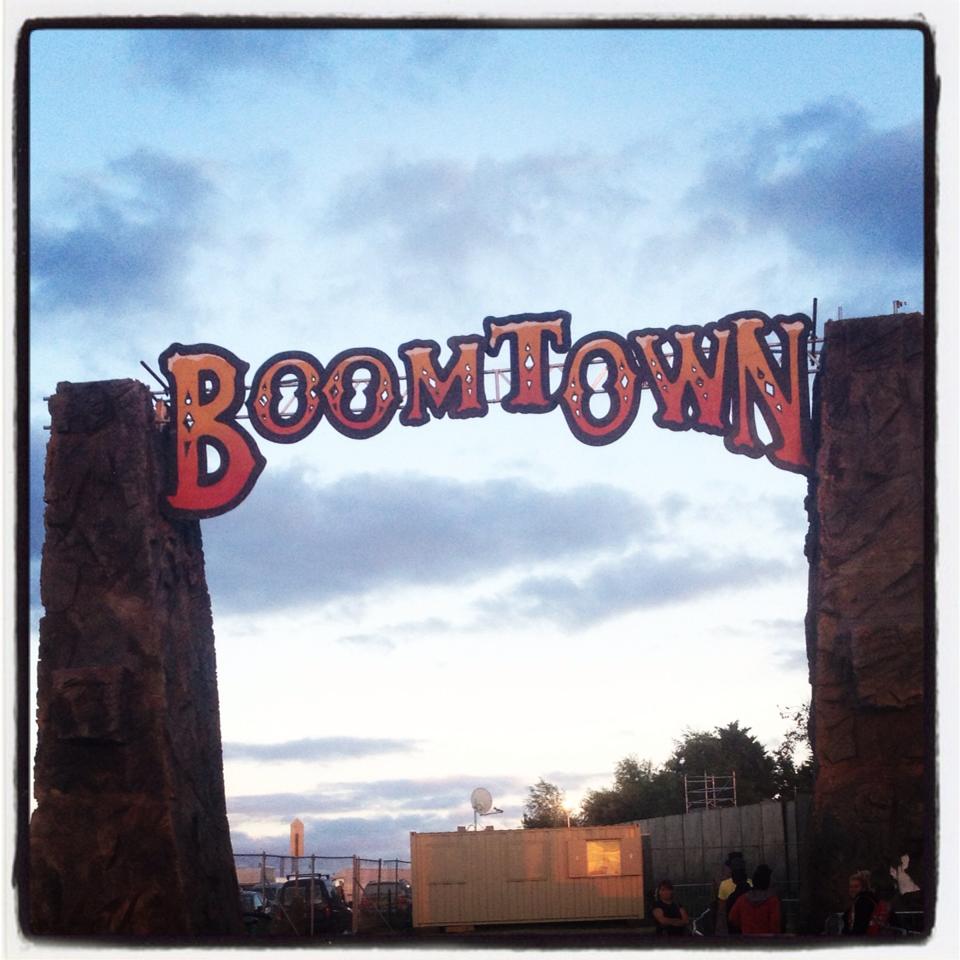 First things first, Boomtown Festival is pretty cool.   Would I take my little one there again... I don't know. There are definitely some issues that they need to iron out first.

I got our tickets for this festival when I was pregnant.   Obviously at that point I had no concept of what it would be like to have a baby, never mind take one to a festival.  After baby was born I did a lot of research on the festival.  Initially I had booked a B&B to stay in off site.  I eventually cancelled this as thought we may struggle to get off site each day.

I read the official website from cover to cover, there is very little information on kids at the festival outside of the official website.  That I imagine is due to the fact that the festival is in its infancy having been only running for a few years.  The website for the festival does however emphasise that the event is very much intended to be a family one and they have children's interests in mind.  The kids have their own dedicated part of 'town' and there is a quiet family camping area.  According to the website the family camping area is the first area that you reach on entering the site. 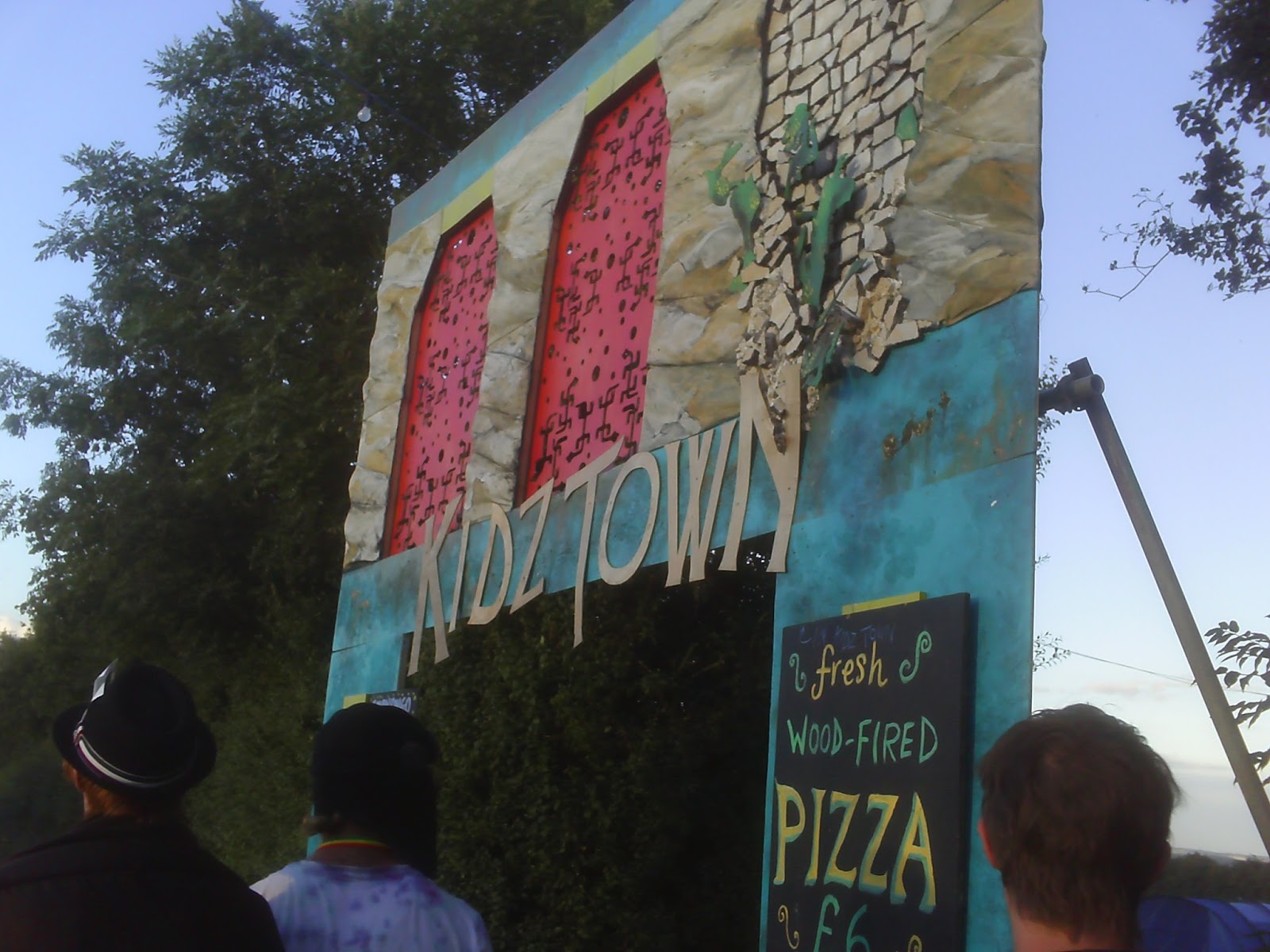 I was fully expecting entering the site to be a bit of a nightmare, it usually is with most festivals. I was however hopeful that given that the capacity of Boomtown is 30k as opposed to Glasto's 100k plus and the fact it is supposed to be a family event that the organisers of the festival would be ensuring that entry was as painless as physically possible...there I'm afraid I was very wrong.

The gates to the car park open at 8am.   The festival gates were due to open at 10.   I am unsure why the need for the two hour time gap but I was aware of this before I set out I suppose.  We aimed to be at the festival for just after 8 in order that I could give the baby a feed (I'm breastfeeding, she feeds every couple of hours) and  then be near the front of the queue so that we wouldn't be behind 30 thousand people when the gates opened at 10 and that we could ensure that we got a spot in the family camping area.  (I wasn't sure how big the area would be and I had read some bits and pieces online that suggested that outside of the family camping area the festival might be a little crazy and so was nervous about not getting a space!)

On arrival at the festival I was a little concerned to find that there was an extreme lack of other children.   We found one other lady with a baby in the queue but no others in sight!   At 10 am it was getting warm and very crowded and I was anxious to get in and get the tent up and sit down with the baby.  I was wearing her in a sling and I was getting hot.  I had a limited supply of water and was conscious that I needed to stay hydrated as I was feeding.

With regards to breastfeeding.  The Boomtown fair website makes mention of the 'Babychamber' where breastfeeding mothers can feed in a quiet environment.  This would suggest that they were expecting feeding mothers like myself and this had also contributed to my decision to attend the festival.

The news then spread through the crowd that there were still some health and safety checks to be completed onsite so they could not let people in.   Why were these not carried out the day before or at least in good time?   Then, news came that the ticket scanners had broken...so the wait continued.

It was around 12pm that the gates finally opened.  That's at least 4 hours of waiting for most people.   Really, not ideal kids or no kids. :(   I appreciate that health and safety checks needed to be finalised but did anyone consider the health and safety of the crowd waiting for such a long period outside with a lack of access to important facilities and shade?

Had I known that entry to the festival at that point was going to be this difficult I would have perhaps delayed mine and baby's arrival to much later that day. I was perhaps just a little naive n my confidence that things would run a lot smoother.  You live and learn eh!

On entry to the festival random searches were performed and I was searched by possibly the rudest woman who told me that I was 'very brave' to bring my baby to Boomtown and basically looked at me like I was a complete moron for being there.

The searching was not an issue, this is common at festivals.   I was however carrying a baby and a backpack. My husband and 3 friends were waved through without searching.  I am unsure why I was selected to be the recipient of a 'random'' search given the fact I was carrying a small baby and somewhat unlikely to have a bag full of Ketamine or knives.   But I appreciate that it is an unfortunate world we live in and you can't trust everyone.

It would have been helpful had the steward in question taken the time to zip up my bag again instead of leaving me to struggle with the baby to pack my clothes back in and zip my bag up.  (My husband was struggling himself with a sack truck and huge bag)  Perhaps she thought that as I was so foolish to bring my child to such an event that I deserved everything I got...I got through the entrance area and burst into tears.

We were then pointed in the direction of the family camping and helped with our bags by another steward who actually appeared to be a decent human.

There was problem number 2.  Instead of being the first camping area you got to, quiet camping and the kids area were at the complete opposite end of the site to where the entrance was.  A-MAZ-ING, thanks for that.  It also did not appear on the map we were given in the program.   We ended up camping in 'Oldtown camping' and not in the specific quiet area.  It was right next to kidstown and there were lots of families camped nearby.  Perhaps they, like us just couldn't deal with walking further to get to the actual family area.

Basically, entry to Boomtown is in vast need of improvement.   Perhaps a separate gate for families to enter would help oh and perhaps a training course in  people skills for the miserable bint on the front gate.

When we finally got into the festival we did actually have a good time.  I clearly had a more chilled festival than I would normally.  I spent a good deal of my time in 'Hold it down' town  which was the hippy area, listening to acoustic music on the flying lotus stage and eating cake. 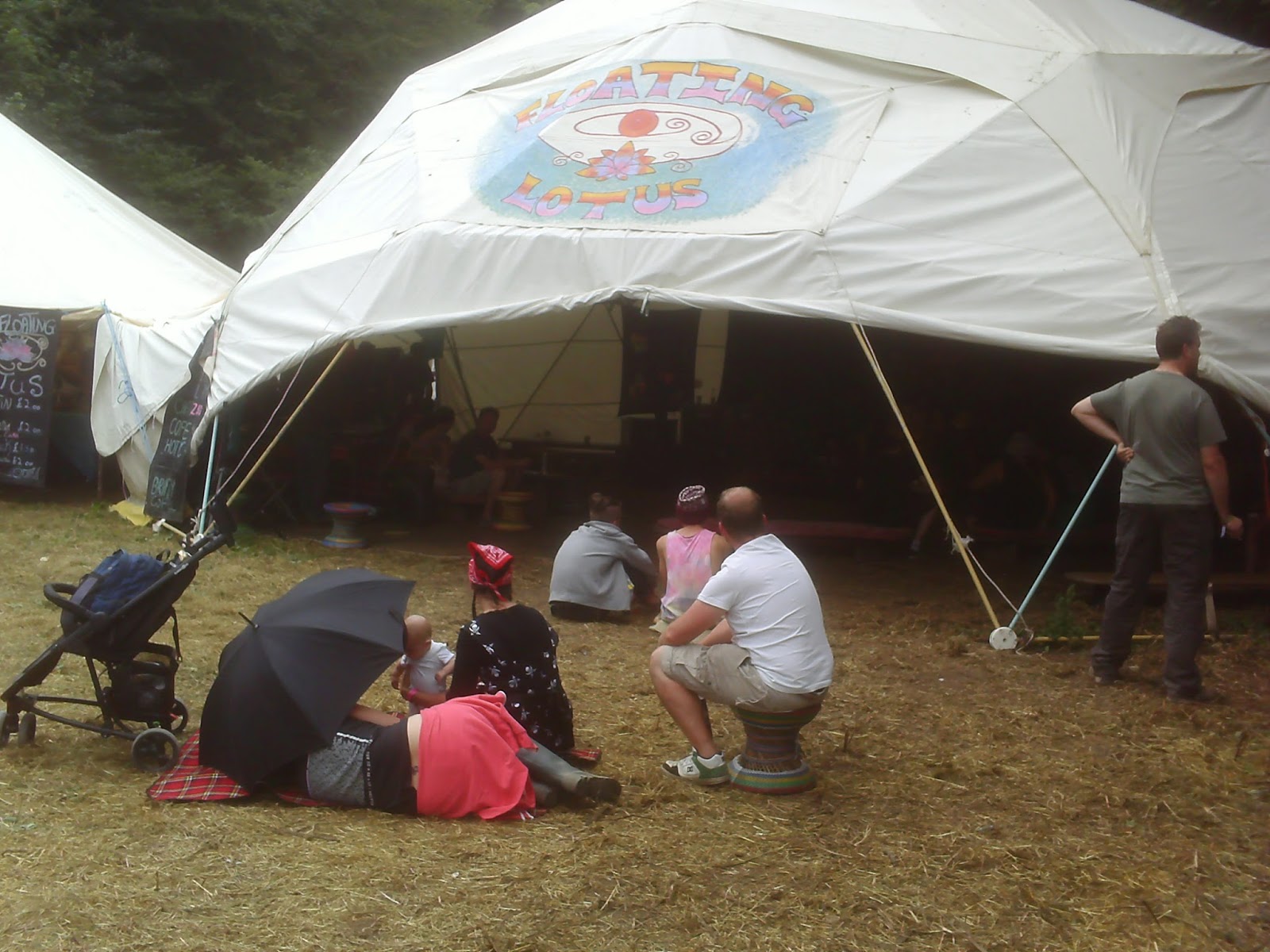 The festival has two main areas.   The bowl, where you will find the big Arcadia spider, the Boombox, people dancing on cars, Downtown, Chinatown and El Barrio Loco and more general madness and the area at the top of the hill where Kidstown, Oldtown, Town Centre, Mayfair ave, Trench town, Hold it down town etc are.   The top of the hill definitely has a more family friendly vibe.

There was a 'Magic Carpet'  moving walkway to help you get up the hill.  In all honesty I thought this wasn't worth the £10 for the weekend.  The queue for it took ages, it was quicker to walk up the hill, you couldn't take luggage on it so it wouldn't have been useful for that either.  Apparently children under 5 were not allowed to use the magic carpet.  It would have been useful if this had been mentioned on the website as it simply stated that children could travel free with a magic carpet ticket holding adult.  The moving walkway was a nice idea in principle, but really...pointless. 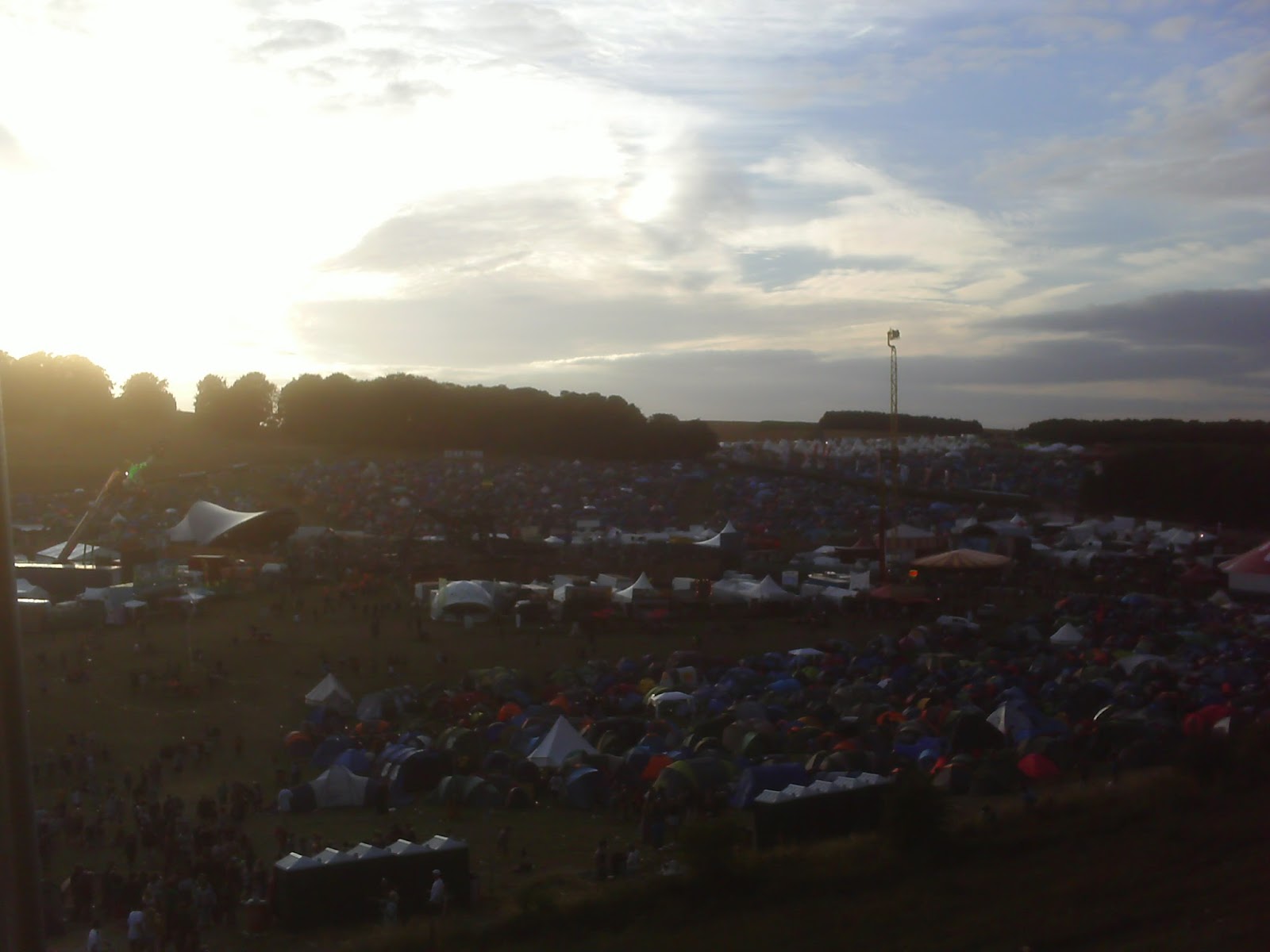 I was able to venture out for a bit in the evenings while the man looked after baby and got to dance like a crazy person at tribe of frog and discover the cool micro venues, like the gypsy disco in Oldtown, Funkington Manor in Mayfair and last aid in town centre.   I loved this about Boomtown as there felt like so much to discover and you could easily wander for hours looking at things without getting bored! 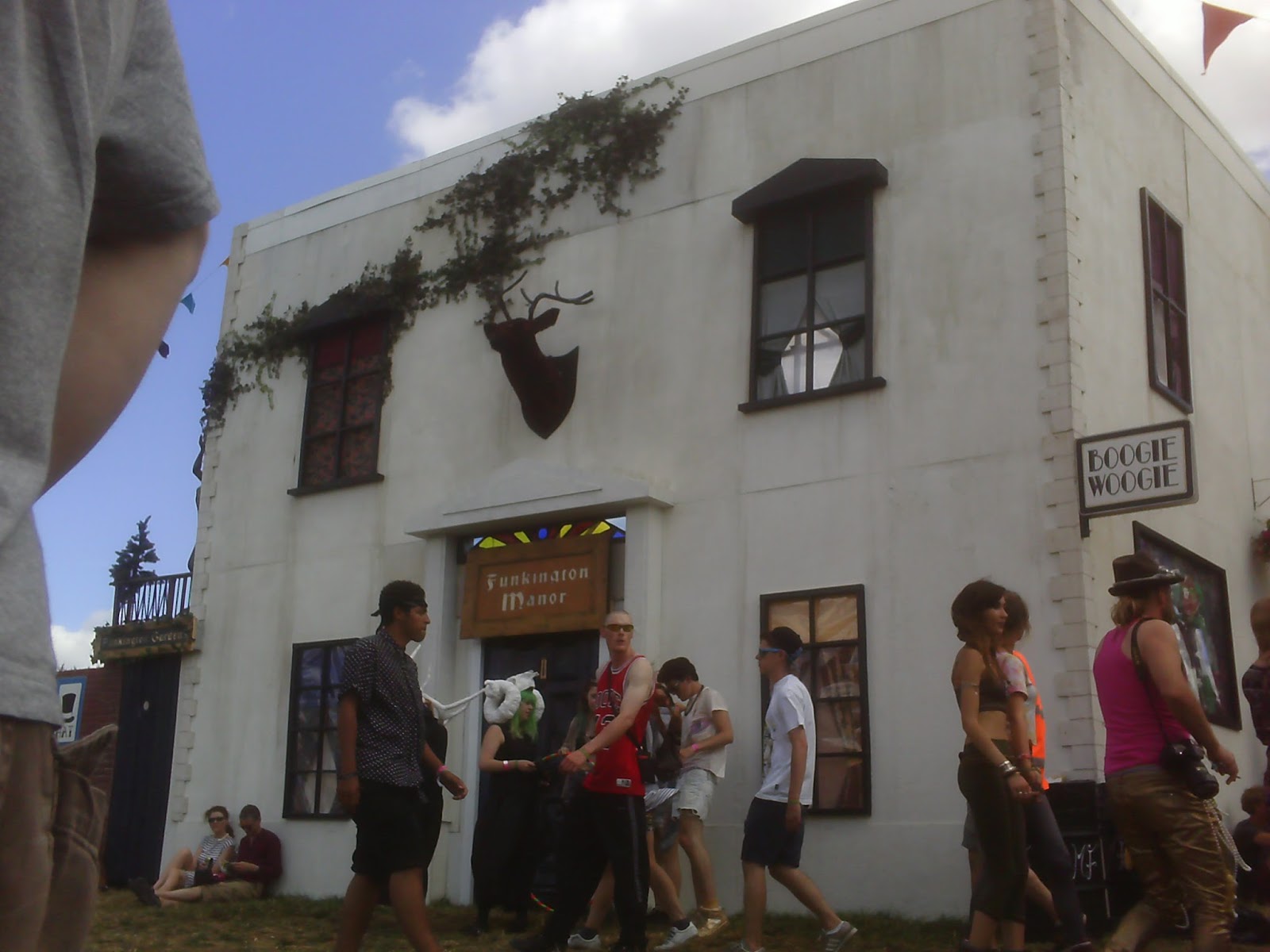 All in all, we enjoyed ourselves.  The festival has quite a nice community spirit.  There were idiots there but they are at all festivals.  Most people I came across were also pretty cool and nobody else (aside from lady at the gate) was negative about baby.  We did see quite a few kids and babies over the course of the weekend and they seemed to be having fun.

'Kidstown' appeared to be a bit sparse and was unsure if everything advertised on the boomtown website was actually there.   I did not see 'the pig' for example over the course of the weekend.  That being said I only made a couple of visits as my little one is not ready for playing with much more than a rattle at present.

I do think that Boomtown has a long way to go before it can really be considered a family event.   If it's your first festival with very young kids I wouldn't recommend it.   I think there needs to be a few improvements on entry and more needs to be added to Kidstown (as really there wasn't a huge amount there in comparison to the kids area at Camp Bestival for example).

The experience has not put me off festivals with a baby.  I shall just be much more selective next year.

Boomtown might get there one day as a family event but at the moment it seems the festival is still only a baby itself. 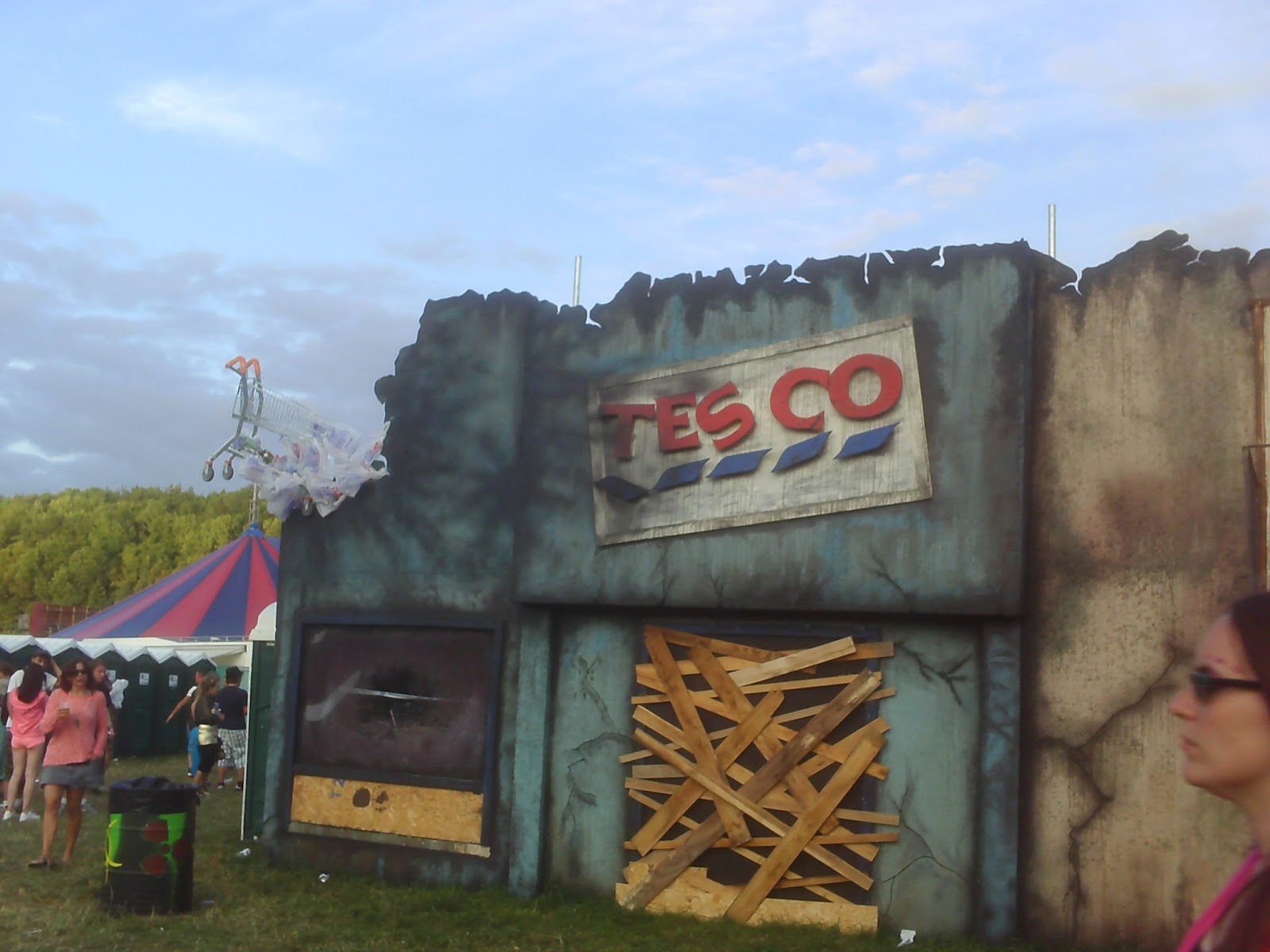 Things that make me happy :)